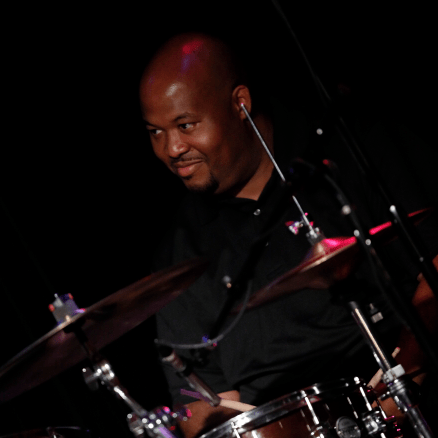 When my original drummer, Paul Fadale, decided to move to Florida in 2013, a wave of panic struck me. It was difficult to see a part of the family move away, and there was the big question of who would replace him in the group. Bobby and I considered the usual suspects, some great jazz players in fact, but we wanted someone who could not only hold their own in a jazz context, but also cross over to other genres. Preston Brown was the perfect choice. In no time, it seemed as if he had always played with the group. We knew he was a great musician when he joined us. We soon learned he was gifted in many other areas, as well.

While most notably recognized as a drummer, Preston is also an accomplished song writer, arranger, and choir director. He has maintained a busy club, concert, and recording schedule for more than 20 years. Additionally, Preston has served as Minister of Music and Choir Director at New Mt. Ararat Temple of Prayer under the ministry of his father, Pastor Bishop Dwight E. Brown in Buffalo, NY. In 2017, he authored and published Marriage, For What? A Soul Searching Journey from “I don’t” to “I do.” Most recently, Preston, an effective communicator and minister, has emerged as a highly sought after speaker at churches, workshops, and events, both locally and nationally.